Hydrogen is the
Ultimate Antioxidant 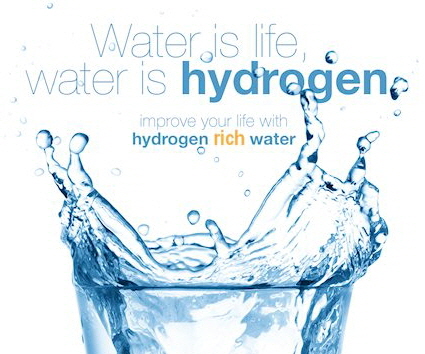 On This Page We Present:
Why Drinking Water That is Rich in Hydrogen May Be the Most Important of All Health Habits.
The hydrogen habit means:

Most people's bodies lack ACTIVE Hydrogen, meaning their bodies lack hydrogen that is unbound to other elements.

The reason that people’s body’s lack Active Hydrogen is that hydrogen is rarely found in the atmosphere or in naturally occurring water for the simple reason that Hydrogen (H) in water (H2O) is so light and always escapes into the atmosphere and then into space. Even though, hydrogen is part of the water molecule, it is always bound to oxygen, except in rare locations where water bubbles up through magnesium rock... and, in this case, some of the water touching the magnesium rock is disassociated into hydrogen and oxygen. Once disassociated the hydrogen quickly bubbles out of the water, and people bathing in the water do breathe some of that or they can put some of the water into capped bottles and take that water home with them to drink. In that way, they can get some of the hydrogen into their bodies and are benefited thereby.

The takeaway is to remember that hydrogen has to be unbound (active) in order for it to benefit one’s health, IE, to neutralize oxygen radicals and to help power cellular mitochondria. Getting more active hydrogen into our bodies, which is called “Hydrogen Therapy”, is one of the most beneficial health practices you can have. Hydrogen therapy has reached the awareness of eminent scientists. It is real and actionable NOW, and you should do it, if you have any desire for optimum quality of life or self-preservation instinct.

Below we list what emerging science and anecdotal reports say that hydrogen rich water does for human health.

Which of these hydrogen benefits are you interested in?

How are all the above benefits possible?

In summary, the benefits of active hydrogen rich water include:

You can learn more about these benefits at:

What do Sacred Healing Waters Have in Common? —Hydrogen

According to Dr. Sanetaka Shirahata (Graduate School of Genetic Resources Technology, Kyushu University), the so called miracle healing water all contains Active Hydrogen (atomic hydrogen) and Hydrogen (molecular hydrogen) in water and the healing effect is simply the result of the health benefits of that Hydrogen.

One of the pioneers behind the health benefits of Atomic Hydrogen is a renowned Cardiovascular Surgeon from Japan named Hidemitsu Hayashi. Below are two of his summaries of Hydrogen benefits:

In November 1995 I presented a hypothesis known by the title: “Water:  Regulating Theory (Hayashi's Model)” in a US health magazine. It says that active oxygen could be scavenged or reduced by atomic hydrogen, which results in production of H2O to give again a birthplace for every life form.

“My hypothesis was born from the clinical observation study in our clinic. Since May 1985 we have confirmed thousands of clinical improvements, obtained solely by exchanging drinking (as well as cooking water) from tap water to reduced water (hydrogen rich water). Those improvements were very exciting and some of them were considered to be  miraculous at that time, when Shirahata's paper was not yet submitted. It should be remembered that such putrefied metabolites are the same ones which are produced as a result of putrefaction of protein. The difference lies only in the fact that the former putrefaction process is brought about by intestinal microbes, whereas the latter is brought about by airborne microbes. Based on these facts, I proposed a hypothesis Pre-and post hepatic Organ Theory in 1988, 1989 & 1990 at the International Symposium on Man and His Environment in Health and Disease' held at Dallas, Texas, USA.

I stated that, as it is impossible to purify the polluted water in the St. Laurence River without purifying the polluted water in Lake Ontario, so it should be impossible to improve the disorders of post hepatic organs, without trying to improve the disorder of pre-hepatic organs, namely putrefaction in gastrointestinal tract. Such clinical experiences have led us to recognize that reduced water is not only"  effective for restoration of intestinal flora metabolism, but also could be effective in scavenging active oxygen. Our clinical observation"  data, and my hypothesis, were delivered to Prof. Shirahata in April 1996 and his research has since started.

Shirahata's paper means that cell metabolism, either microbial or cancerous, depends on its intracellular water, namely cell metabolism.  This can vary according to the property of intracellular water, i.e. hydrogen-rich or not. And even cancer cells might lose their characteristic feature of unlimited proliferation when they are immersed in hydrogen-rich water, originated and developed in Japan, but totally unknown in the past throughout the world. The solution might now be in our hands. Our 'new water' should be the first choice for all of us to take, as has been suggested by Happe, Shirahata and ourselves.

Case study presentations showed improvements of diabetes, hepatoma & atopic dermatitis. Now, there could be no wonder why such clinical improvements have been obtained. In short, the ' invisible reaction' of active hydrogen against active oxygen was regulated at first. As a result of it, 'visible reaction', so-called clinical exam data as well as clinical symptoms have been improved.”

Devices to produce reduced water were introduced into our clinic in May 1985. Soon after, the Hydrogen Producing Mineral Stick was designed to make hydrogen-rich water available inexpensively and more efficiently to all. This Hydrogen Producing Mineral Stick showed to be a more effective source of hydrogen than electrolyzed-reduced water with no concern of hydrogen gas dissipating within minutes after being poured. This then allowed even better results to follow. Based on the clinical experiences obtained in the past 15 years, it can be said that introduction of naturally reduced water (using H-01 Active Hydrogen Generator; later named The Hydrogen Producing Mineral Stick), or electrolyzed-reduced water for drinking and cooking purpose for in-patients should be the very prerequisite in our daily medical practices. It is because any dietary recipe cannot be a scientific one if property of water taken by the patients is not taken into consideration.

The Ministry of Health and Welfare in Japan announced in 1965 that the intake of reduced water is effective for restoration of intestinal flora metabolism.

© All rights reserved. 2017 to 2018. If you have a health condition, please consult a medical professional in regard to your existing health problems. None of the statements in this website have been reviewed by the FDA. No products mentioned herein have the purpose of diagnosing, treating, mitigating or alleviating any disease condition. We offer no warranty of benefit nor guarantee against harm. Nutrition and lifestyle should never be utilized in lieu of consultation with medical professionals. Anecdotes related herein have not been vetted and results may have been due to additional factors not disclosed.

Anyone who relies on this website information in lieu of consultation with a health professional does so at potentially grave risk. Scientific data (that may be mentioned on this site) is always changing. Also, there are dangers inherent in virtually any health condition that need to be evaluated by your health care professional who prescribes according to your unique situation. The biggest danger in self-prescribing is the delay that may result in getting the most effective treatment for your unique body and particular situation. Only your licensed healthcare provider is permitted by law to recommend a course of action for your health according to your uniqueness and the serious of your health need. Be advised. Be smart - and seek licensed medical help when needed.